The safety and wellbeing of all those working to restore the North Walsham and Dilham Canal Trust is our highest priority. It is essential that the Trust strictly adhere to the latest Government guidelines on social distancing. It is with regret therefore that for   the time being all Trust activities will cease. The Trust will go into a state of hibernation until the crisis is over.

Wish to join us by becoming a member?

Wish to take a canal cruise on our ‘green, solar powered’ trip boat?

Welcome to the North Walsham and Dilham Canal Trust

Welcome to the website of the North Walsham and Dilham Canal Trust.

The waterway, nearly nine miles long, is Norfolk’s only wherry sailing canal with locks and was opened in 1826.  It runs from Antingham, north west of North Walsham, to Wayford Bridge, north west of Stalham. Built by 100 Bedford navvies starting in 1825 it opened the following year in 1826.  Wherries would sail its length transporting cargo to and from the mills and communities along its route (see the map below) the canal was last sailed in 1934 by the wherry “Ella”.

The Canal’s decline began with the arrival of the railway and over the following decades became choked with vegetation. Many stretches were completely dry and its infrastructure of locks and bridges was crumbling by 2001 when volunteers from the East Anglian Waterways Association (EAWA) launched what have become regular working parties to rescue the Canal.

The EAWA’s success led to the formation of the Canal Trust in January of 2008. Work carried out by The Old Canal Company, their employees and Trust volunteers means that a two-and-a-half mile stretch of the Canal, from Ebridge Mill Pond to Swafield Bridge, is in use once more and it is proving popular for activities including walking, cycling, canoeing, sailing, fishing, wild swimming and bird watching.  Ten years later, on the 29th October 2018, the Trust became a Charitable Incorporated Organisation being allocated the charity number of 1180474.

Ivan Cane, Chair of the Canal Trust, said: “The restoration of a canal is not just for boaters. A restored canal corridor, as seen on the Ebridge reach, becomes a community asset and a tourist attraction. The permissive paths, running alongside this stretch of water are giving people the chance to relax, walk, picnic, pond dip, watch wildlife, fish or gongoozle at the passing canoeists or sail boats. Here, at Ebridge, Norfolk’s industrial archaeological gem is coming back to life, and open to all to enjoy”.

Today, one family and three companies own different sections of the Canal.

Wish to support the work of the Canal Trust and become a member? Click HERE

Map of the North Walsham & Dilham Canal below 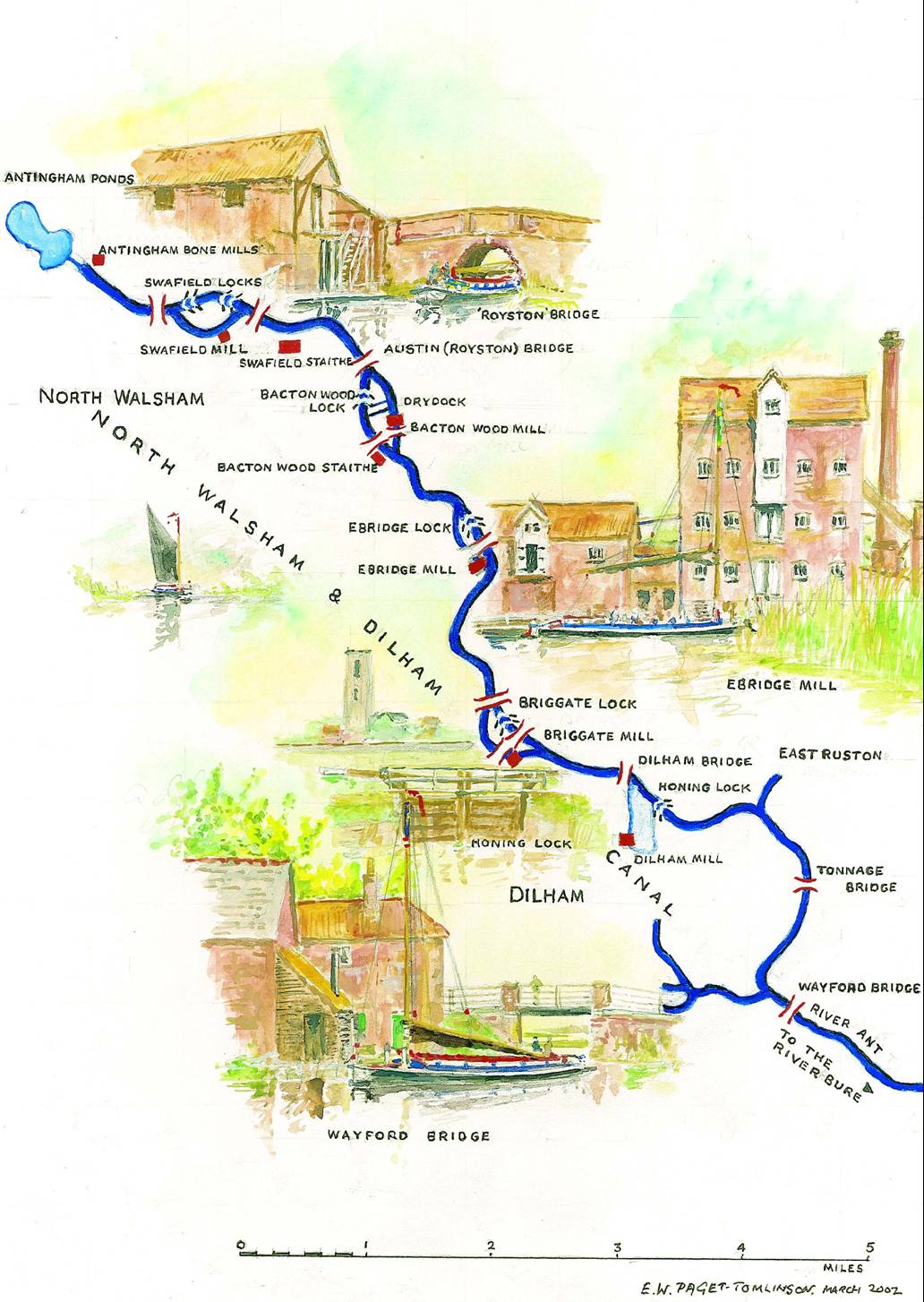