Fish of the Canal

Appearance: They have large bony heads with prominent forward/upward looking eyes, a broad flattened snout and a large mouth. The mouth contains a fierce arsenal of teeth, with rows of backward pointing, razor sharp teeth in the top jaw and larger needle-like teeth in the lower jaw. The head is mounted on a long, torpedo shaped body with fins being primarily rear positioned for fast acceleration. Individual marking patterns are unique to each pike, like fingerprints to humans.

While fierce looking, the pike is a very fragile fish and the upmost of care must be taken when handling these fish on the bank and when returning them back to the water something the Trust takes seriously with the creation of specialist Pike Fishing Rules.

These apex predators are abundant in the Canal, with catches regularly posted on the Trusts social media pages. The largest Pike said to have been caught is 20lbs and plenty more into double figures.

Perch are also numerous in the canal and it has proven to have become a popular local water for perch fishing. Largest reported catch was 2lb and many of around 1lbs plus. 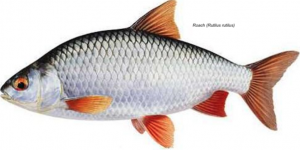 Appearance: the roach is a shoaling fish, silver in colour with grey-brown to orange fins. Roach can be confused with rudd, to check you can count the lateral line scales (rudd have 40-55), look at the shape of the mouth (rudd have an upturned mouth as they primarily feed at the surface) and make sure the front of the dorsal fin is in line with the pelvic fins (In rudd the dorsal fin is well to the rear of the pelvic fins).

Roach are the regular catch of the canal for the pleasure angler, catches from small fish up to specimen size of nearly 2lbs. 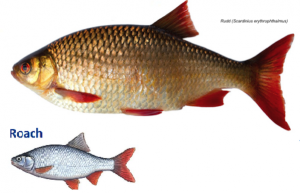 Rudd are primarily surface feeding fish so not as easy to catch as roach but for those who know how to catch them there are plenty to be caught and nice sizes too.    (Picture shows the size of Roach in contrast to Rudd)

Appearance: Tench are easily recognised by their olive green colouration and small red eyes. They have a stout body and rounded powerful fins. They can on rare occasions be of golden colouration.

The canal stretch above Ebridge was once famous for its tench and they can still be found today, these two beauties were caught in the summer on 2018 by a local angler.

Appearance: the bream is a deep-bodied fish with a high back and flattened sides. Typically it is dark brown or greyish on the back with younger fish being much more silvery.

Bream tend to shoal away from other fish making them a little allusive for pleasure anglers to catch, but we have bream in the OCC waters as the bream/roach hybrid below will prove.       The more secretive anglers have confirmed “off the record” of catching bream and its only time before we get some further photographic proof.

Appearance: dace are a small silvery fish and tend to occur in the lower reaches of rivers. They can sometimes be confused for a small chub. Check the lateral line scale count (chub have 44-46) and fin shape. Chub have a convex outer edge to their dorsal and pelvic fins while dace have a concave outer edge. Chub tend to have much more distinct wide mouth shape but this should be used as an identification tool along with the other features given.

Small dace are caught at Elbridge, we spent time identifying it wasn’t a chub with the angler who caught it. We have also seen small shoals of dace in the waters above Royston Bridge.

Appearance: A shoaling fish, dusky silver in colour often with a brown to bronze sheen. They are quite distinctive with a blunt snout, rounded body and very large mouth. Small chub can often be confused with Dace. Check the lateral line scale count (Dace have 47-53) and fin shape. Chub have a convex outer edge to their dorsal and pelvic fins while Dace have a concave outer edge.

Report from work party volunteer that they witnessed someone releasing some chub into the canal in 2017.

Again a few more of the secretive anglers have told me “off the record” of rare chub catches. 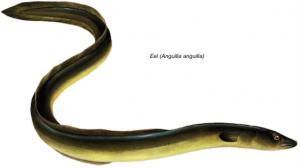 Appearance: eels have a distinctive elongated, cylindrical body shape with small gill openings, one pair of pectoral fins and no pelvic fins.