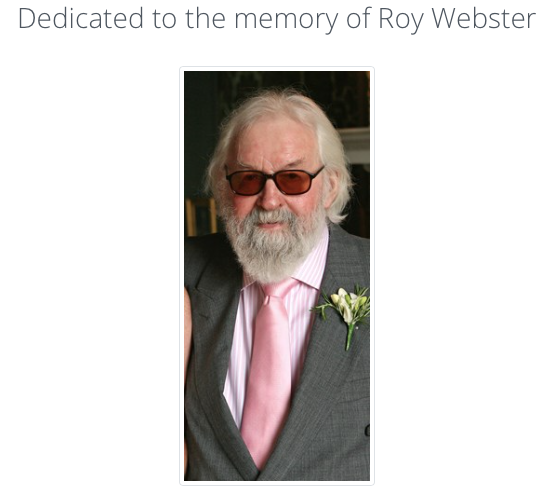 Former football and fishing journalist Roy Webster, who wrote hundreds of thousands of words for publication in the Eastern Daily Press and its sister papers across more than 50 years, has died aged 87.

Roy, who died on Monday, 18th January 2021, wrote angling columns and fishing match results well into his 80s. He tackled both standard ‘biggest fish’ stories, but also controversial and complex issues in the fishing world such as proposed otter culls, the theft of large quantities of silver fish as bait, and the declining numbers of rod licences. He was well known among family and friends for having strong views on these and many other topics, and was never shy of a vigorous debate, often at the bar of his local, the Crown in Smallburgh.

In 2004, at the age of 71, Roy’s Wroxham Football Club reports gained worldwide fame when he was banned from the ground by the club after a disagreement, but continued to collate his reports from the top of a ladder in a friend’s garden next to the ground, notebook and pen in hand.

The club and Roy resolved the dispute, but only after more than 200 days of Roy ‘up a ladder’, during which time he was the subject of international newspaper and television reports, and live radio coverage.

Roy was born in 1933 to Ernie and Joyce, in a house in Dilham, near North Walsham, with no electricity and no running water. He was brought up with a ‘make do and mend’ mentality which continued to serve him well throughout his life, despite success in various businesses.

His future football journalism days were preceded by being a talented centre half, despite his relatively diminutive height of 5 foot 8 inches. He played for Dilham Football Club but was also offered a trial with Notts County and played RAF Representative football, which was a notable achievement in the 1950s, but particularly so as the only team member on National Service.

Roy’s National Service days may have taken a very different turn when he was asked to join a special forces unit on the basis of various evident skills including his marksmanship, only to fall short of the relatively simple swimming test – because he was terrified of being in the water following a childhood water trauma.

Despite that fear of swimming, Roy’s future fishing journalism days were based on a keen interest in angling. As well as being a talented fisherman, which saw him catch both for the table during wartime and post-war rationing, as well as latterly for sport, he became an administrator of angling matches.

Roy worked as an accountant for the Alexander family at Westwick. He was an astute gardener, proudly producing new potatoes every spring a month before most people thanks to various tricks, including rising at 2am on frosty mornings to spray his tender potato leaves with water to prevent damage from the cold.

He loved the green baize and enjoyed many successful evenings playing poker, Nap and dominoes.

In the last few months of his life, he earned the mantle of author when some of his writings about growing up in rural Norfolk – particularly his fishing and wildlife adventures around the North Walsham and Dilham Canal – were turned into a book called Adventures of the Boy Roy, the first print run selling out within a fortnight. A second print run is currently being processed.

Roy was hugely grateful to the staff of Heron Lodge in Wroxham, the care home where he spent the last few weeks of his life, writing that “every person employed here displays a wonderful, unselfish attitude of undeniable dedication”.

Roy is survived by wife Patsy, children Gay, Will, Tom, Charlie and Kim, and 10 grandchildren.

A private family-only funeral will be held on the 4th February.

Any donations can be made here https://roywebster.muchloved.com/  all being donated to the North Walsham and Dilham Canal Trust

You may wish to make a donation in memory of Roy via this link https://www.justgiving.com/crowdfunding/roy-webster?utm_term=GM3k2J2ng All monies raised will be passed to the North Walsham and Dilham Canal Trust.